WE WILL NOT SELL OUR PLAYER TO KOTOKO – YAW BOATENG

by Guest Post
in Transfers
Reading Time: 1 min read
A A
0 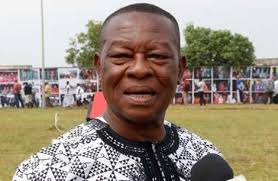 Yaw Boateng, board chairman of Bofoakwa Tano has disclosed that his outfit is not ready to trade their striker Welbeck Takyi with any team in the ongoing transfer window in Ghana.

The young striker has netted nine goals in eleven matches played in the national division one League so far.

The youngster is said to be on the raider of most premier league clubs especially Asante Kotoko who have made an approach but Yaw Boateng insist that they will not trade Welbeck Takyi for any amount.

He said in an interview on Happy FM, “we will not sell our player to Asante Kotoko. They have decided to sell their striker, Kwame Poku and they have made a lot of money from the sale, and they are bringing us something small for ours”.

“We have received letters from other clubs, but we want to remain focused and qualify for the premier league.”

GPL TEAMS WITH THE LARGEST FAN BASE