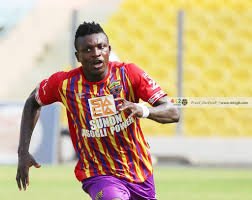 Striker of Accra Hearts Of Oak, Victor Kwaku Aidoo has opened up on how he struggled whilst playing for Samartex in the division one League.

Victor joined Hearts Of Oak at the start of the 2020/21 league season after impressive outing in the division one side.

He is currently the highest scorer for Hearts Of Oak in the current league and has opened up on how he struggled whilst playing for the division one side.

According to him, he had to work on a rice farm to make a living. He had to sometimes work as a bus conductor, which is locally know as “mate” in order to survive.

“Life wasn’t easy, before training at Samartex, I have to carry from people shop before I could make money to feed”, Victor told hearts TV.

“I use a car mate all to Kumasi to carry rice with Kia Trucks and back to Samaboi”.

Victor Aidoo has promised to help young players who are in deprived areas to realize their dreams of playing professional football if God blesses him.

“If God blesses me, I will help young players realize their dreams of playing to the very top of their career”

Victor has scored seven goals for hearts of oak in the ongoing premier league campaign in his first season with the club.

Victor has been popular among Hearts Of Oak fans for his special technique when it comes to penalty shootouts.