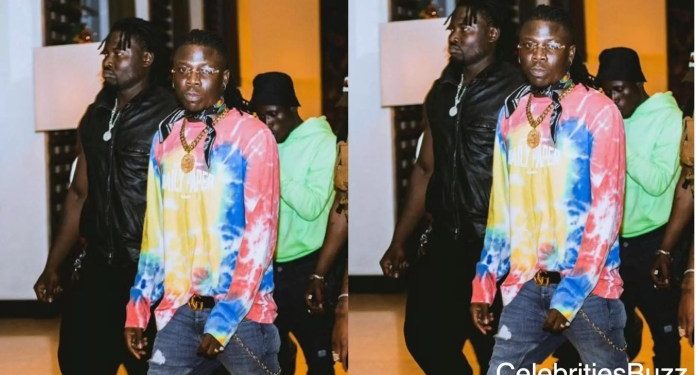 The Ghana Police Sevice have arrested two persons who belong to Stonebwoy’s camp after allegedly assaulting a sprinter driver they were involved in a car crash on the Bibiani-Abuakwa road on Saturday evening.

Per the Abuakwa Divisional Police Commander, Chief Supt. Yaw Obeng Asubonteng, Stonebwoy and his team were travelling to Kumasi after a performance at Bibiani in the Western North Region when one of the vehicles got encountered in the crash.

Two persons from Stonebwoy’s camp held the driver involved in the car crash and beat him up.

“According to the information we had the vehicle which collided with the sprinter bus didn’t even stop.”

”The driver sped on and another vehicle which was following, two guys from that car accosted the driver that had the accident with that of the musician.”

“They beat him and held him hostage in their car and they were sending him to either Kumasi or Accra.” He said.

Chief Supt. Yaw Obeng Asubonteng added the police patrol team after getting the information chased Stonebwoy’s team and arrested them at Abuakwa where the two persons were detained for an hour before been transferred to the Bibiani Police station for investigations.