TEXTBOOKS WITH OFFENSIVE EWE ILLUSTRATIONS NOT APPROVED FOR SCHOOLS – NaCCA

by Angela Dede Sackey
in Education
Reading Time: 1 min read
A A
0

The contentious textbooks which have received disapproval for their illustration of Ewes have not been approved for use in schools, says the National Council for Curriculum Assessment.

The council in a statement asked one of the publishers of the books, Badu Nkansah Publications, to withdraw its book which was noted to feature a song that depicts Ewe tribe.

“In each of these books and others discovered on social media, the authors make inappropriate references to personalities and ethnic groups which are deemed unfortunate distasteful and are in contradiction with NaCCA’s Book Submission Guidelines.”

RE-OPENING DATE FOR SHS THREE STUDENTS SHIFTED TO MAY 5

These mentioned books are not among of approved books for academic work on the council’s website.

Golden Publication have also been held responsible for  the bad illustrations in its textbook , “and has asked them to withdraw all the unapproved offending books stated and any other from the market and submit copies for assessment and approval which they have complied with.”

“Additionally the publishers have been asked to issue an unequivocal apology through the electronic, print and social media.”

The content of the books ‘gingered’ arguments on social media from members of the Ewe ethnic group who criticised the stereotypes.

The North Tongu MP, Samuel Okudzeto Ablakwa also filed an urgent question in Parliament for the Education Minister, Dr. Yaw Osei Adutwum to answer on the issue. He described the books as “bigoted.” 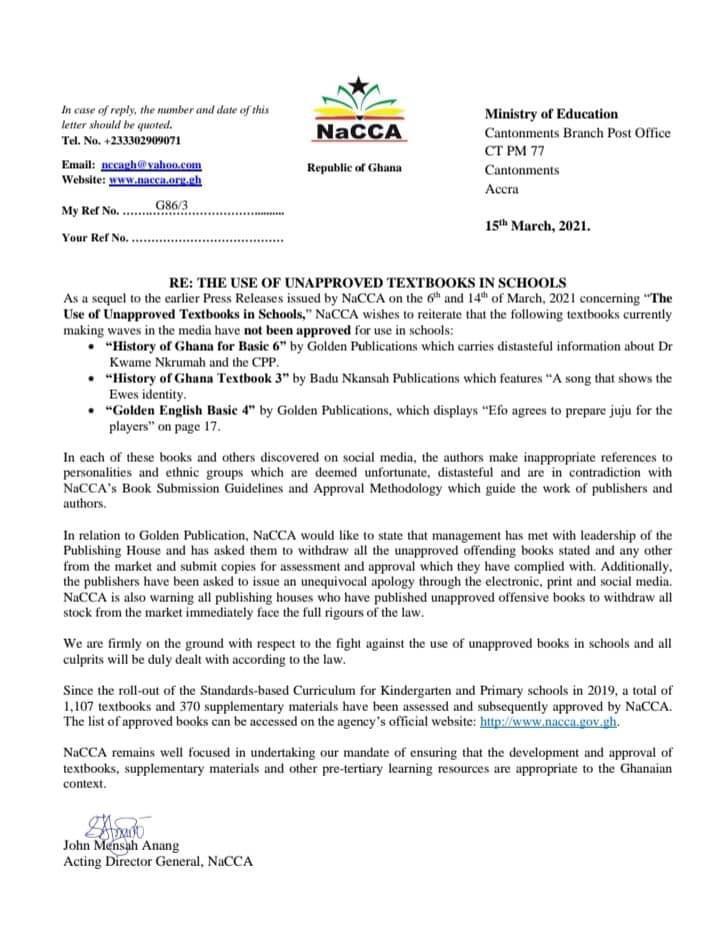