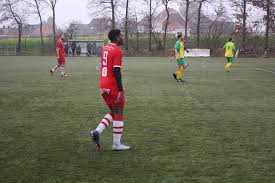 Sharaf Mahama, son of former president, John Dramani Mahama, is among the players who are taking part in this year’s Wolves International Tournament.

The tournament was launched on the Astro turf in Madina in Accra with a short ceremony.

Eight football teams will lock horns in the tournament.

The venue for the tournament is fixed to be the Madina Astro turf.

Sharaf, was among the goal scorers in Top Scout Academy 2-1 win over White Wolves FC.