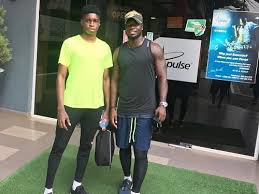 Rodney Appiah, son of  former Ghana Captain, Stephen Appiah, made his debut appearance for Accra Great Olympics in the match day 22 of the Ghana premier league as Olympics claim the victory against Liberty professionals at the Accra Sports Stadium last Sunday.

The youngster was introduced into the game in the second half as he helped his side claim a 2-0 win against liberty professionals.

Olympics signed Rodney from second division side KingStep FC in the second transfer window of the Ghana Football Association after an impressive performance on his trial at the club.

His hard work has gained him a part of the first team and he was given the opportunity on Sunday to follow the foot steps if his father by coach Annor Walker.

Rodney was on social media after the game to express his delight for his debut in the GPL.

“Today marks a milestone in my career as I played my first game in the GPL for the club Great Olympics. Looking forward for an exciting time ahead”.

The win takes Olympics to the third place on the league log.

FDA MUST EXAMINE NEXT BATCH OF COVID-19 VACCINES – GMA