by Guest Post
in Automobile, Local News
Reading Time: 1 min read
A A
0 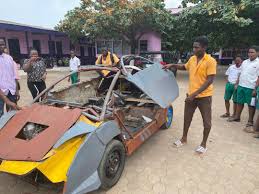 Kelvin Odartei said  “I use to collect metals from the refuse dump while i was working on my car.”

“And also I used to pick up things I see on the ground, this made people outside think i was getting mad”.

Kelvin Odartei is a fresh graduate of Cosmos International School. According to information available now, Kelvin Odartei is an 18-year-old boy who has a great interest in engineering and has put his passion to use by building his Lamborghini car.

Kelvin and his invention have been spotted online by many people

He has made a historic move by deciding to take the car out for a spin on his last day in JHS, which would cause his name to be remembered forever by the school authorities. 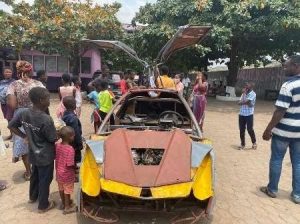 Odartei explained that it took 3years for him to complete this invention and it is all because of financial problems in the family.

He spoked on how he had to fast just to save money to buy parts he needs to fix up the car.

Even though there was no money for him to use he tried his best to work after school.

But working after school still did not earn him that much.

From news been heard, Kantaka has adopted to take care of Kelvin Odartei and to train him.

GHANA TO PLAY SECOND FRIENDLY AGAINST EQUATORIAL GUINEA IN OCTOBER

GHANA TO PLAY SECOND FRIENDLY AGAINST EQUATORIAL GUINEA IN OCTOBER