The first edition of the Naa Gadangme Reality Show organized by TV Africa in collaboration with Agidor Events has crowed Naa Ayeley Charwey as the winner last week Saturday.

The premises of GH Schools was flooded by hundreds of people who had thronged the place to catch glimpse of the five finalists of the maiden edition of the Naa GaDangme beauty pageant. 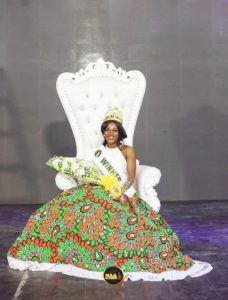 Both within and without of the Mega Studios of the school was filled to capacity. The Red carpet gave the chiefs, Queenmothers, and other dignitaries who had come to support their candidates the opportunity to express their views on the show so far.

Ten beauty queens were set to battle it out for the crown in the maiden edition of Naa-GaDangme 2020 in promoting, Portraying and Projecting the GaDangme culture and also use the medium to unite GaDangmes as Unity is Strength with its theme Yoo Kpakpa Namɔ aana?

The Naa GaDangme 2020 beauty pageant was put together by event organizers, Agidor Events and TV Africa with the aim of empowering young Ga Dangme ladies in the Ga State and its environs to Promote, Portray and Project the Rich GaDangme Culture. 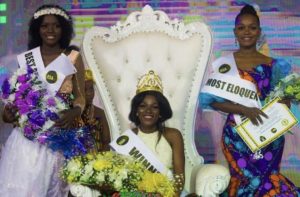 It is also seen as a way of educating the masses on the Ga Dangme Tradition. The event which started on 3rd October was contested by Naa Nuerkie of Kpone, Naa Meeley of Prampram, Naa Adjorkor of Teshie, Naa Kwaley of Ga Mashie, and Naa Ayeley of Nungua.

Chief Executive Officer of Agidor Events Dorcas Naa Atswei Koney was grateful to the chiefs and people of the Gadangme State for their support to the program.

The finalists had three tasks to perform at the finals of the nine-week event – to perform indigenous culture, to perform an indigenous dance, and to answer questions on the Gadangme people and culture. In the end, Naa Nuerkie of Kpone was crowned the Second Runner-up and took home Ghc 4,000.00, a fully paid educational scholarship, and a laptop

Naa Ayeley Charway of Nungua was crowned Naa Gadangme 2020. She took home a whooping GHc 10,000.00 and an air ticket and a sponsored trip to the USA, Virginia, and a fully paid educational scholarship.

In an interview, Naa Gadangme 2020, Naa Ayeley Charwey expressed her appreciation to the organizers and supporters for their assistance which has brought her this far.

AKUFO-ADDO RE-ELECTED AS PRESIDENT OF GHANA